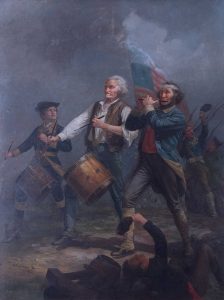 The Spirit of ’76, prominently featured, watches over Selectmen’s meetings and other special events such as weddings. Also on display in this room are many notable paintings, busts, artifacts of Marblehead history including the original 1684 deed of purchase for the town’s land from the Naumkeag tribe for 16 British pounds (approximately $80 in today’s dollars), and historic documents from Marblehead’s past including letters from George Washington, Elbridge Gerry, Paul Revere and documents signed by John Hancock and Samuel Adams. 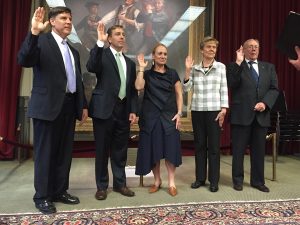 The Selectmen’s Room also includes the large painting Washington Passing the Delaware, by William T. Bartoll, c. 1850, copied after Thomas Sully’s 1819 painting of the same name. In 1975, the late Herb Haskell, Marblehead’s Building Inspector, found this Bartoll painting on a dirt floor in the cellar of Abbot Hall. The painting was so dirty it wasn’t identified until after it was carefully cleaned. Another painting in the Selectmen’s Room is Crossing the Grand Banks, by William E. Norton, donated to the town in 1876 by James J. H. Gregory. It depicts fishing dories and schooners on the Grand Banks typical of the Marblehead fishing fleet of the 1800’s.