As the title implies, maps are central to all three Mapping Marblehead exhibits.  Through maps, the changes in the town are clearly visible, and studying them can reveal those changes in a dramatic, and often surprising, ways.  Videos offer guidance on some interesting map features, and interactive maps let visitors compare present day Marblehead with maps of its earlier times.  Interactive maps present older maps along side current maps of Marblehead to let you compare and explore by clicking, dragging, and zooming.  For map lovers and researchers, a list of maps relevant to Marblehead’s history, along with links to their web locations, is also provided.

To review the history of the first two exhibits, download the exhibit booklets as PDF files here:

If you’re new to interactive maps, you might want to start with the videos to get a feel for what is possible and how to use the maps.  Otherwise, just jump in and remember that the refresh button on your browser will always return you to a fresh start.

Follow these links to introductory videos and a “how to use” video on the Marblehead Historical Commission YouTube Channel.

Introduction to Mapping Marblehead – from Founding to Freedom

How to Use the Mappng Marblehead Interactive Map Exploration

Mapping Marblehead, from Founding to Freedom (the 17th and 18th centuries) 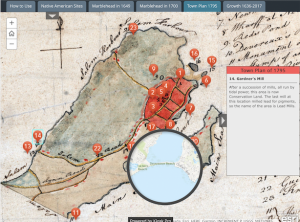 The interactive maps from the first exhibit were presented by a single screen that offered maps of Native American sites in Marblehead, a view of Marblehead in 1649, a view of Marblehead in 1700, the first official Town Plan map from 1795, and an animated map showing the growth of the town from 1636 to 2017.  All but the animated map offered the opportunity to view a current map of the town “beneath” the historic map.

Mapping Marblehead, the Nineteenth Century
Two interactive maps from the 19th century show a town that has grown substantially, but one that is still evolving. 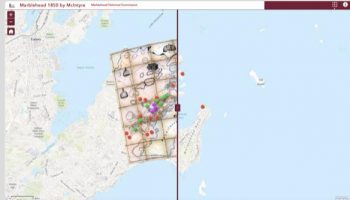 1850 McIntyre Plan of Marblehead
By 1850 Marblehead had grown in both size and density.  Mapping techniques had also evolved to create more accurate maps from an “actual survey” as this map by Henry McIntyre proudly proclaims.  Vignettes of buildings around the top of the map show buildings as they appeared in mid-century. Abbot Hall had not yet been built, nor were shoe factories in evidence.  Ropewalks and shipyards made it clear that fishing was still the industry at the time.  Religion and education were both very important to the town’s population as indicated by the number of churches (purple diamond symbols) and schools (green diamond symbols).  Other points of interest are shown with red dot symbols. 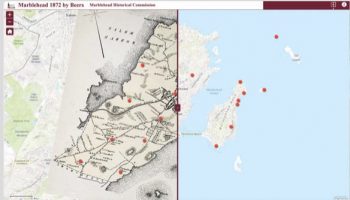 1872 Beers Atlas of Essex County
This map of Marblehead is from an untitled atlas of Essex County, published by D.G. Beers in 1872.  The downtown area continues to be built out and there is expansion both inland and to the south.  During this time, the population grew from a little over 5,000 in 1830 to nearly 8,000 at the time of this map.  The Neck is still relatively undeveloped and is mostly a tenting spot known as “Camp Lowell Village.”  The Swampscott branch of the railroad was not yet built, Points of interest are indicated by red dots.  Tap or click on them for more information.

The following links will help you find high-resolution digitized versions of the maps featured in Mapping Marblehead as well as their accompanying historical documents. 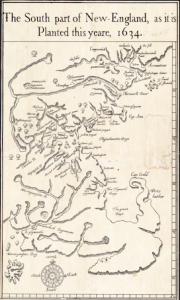 South part of New-England, as it is planted this yeare, 1634 by William Wood

This map was published in William Wood’s New Englands Prospect in London to encourage settlement in the colonies.   Marble Harbor is shown of the map, but the text of New Englands Prospect refers to Marvill Head.  (Map reproduction courtesy of the Norman B. Leventhal Map & Education Center at the Boston Public Library.) 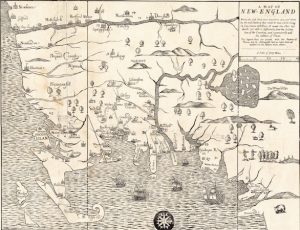 This map was among the first maps printed in America and was used to illustrate The present state of New England : being a narrative of the troubles with the Indians, 1677 by William Hubbard. Marblehead is shown with its modern spelling on this map.  (Map reproduction courtesy of the Norman B. Leventhal Map & Education Center at the Boston Public Library.) 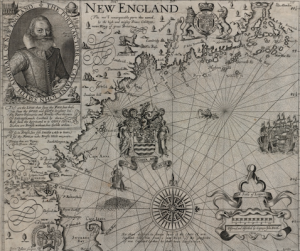 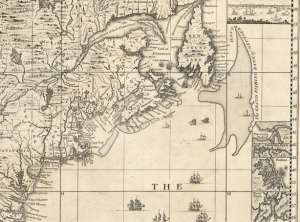 1775 An actual survey of the sea coast from New York to the I. Cape Briton, with tables of the direct and thwart courses & distances from place to place.(Detail of inset map), Cyprian Southack, 1775

This map encompasses much of the eastern sea coast, but the inset map clearly shows the distance from Marblehead to the Grand Banks fishing grounds. (Map courtesy of the Library of Congress, Geography and Map Division.) 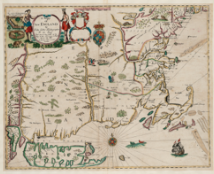 1675 A Mapp of New England by John Seller

Marblehead is shown as “Marblehed” on this map.  (Map reproduction courtesy of the Norman B. Leventhal Map & Education Center at the Boston Public Library.) 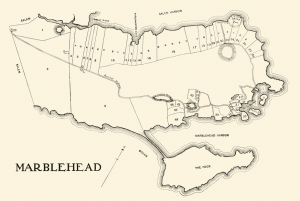 Marblehead in 1649 from The History of Salem by Sidney Perley, 1926

In 1926, Perley published a history of Salem that included this map of Marblehead, drawn from legal records and deeds.  This map can be found in Volume 2, Chapter 13, p. 197. 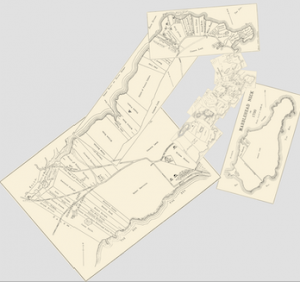 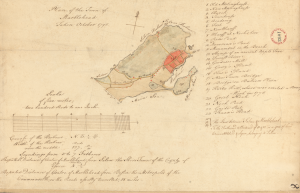 Plan of the Town of Marblehead by Alfred Ingalls, 1795

Commissioned by the state of Massachusetts as part of a survey of all of the state’s towns, it was drawn by Alfred Ingalls in 1795.  This map of Marblehead is the first known map of the Town and is in the collection of the Massachusetts State Archive. 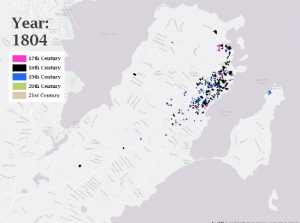 Marblehead Growth 1636 to 2017
This one minute video (on the Commission’s YouTube channel) shows the growth of Marblehead, Massachusetts from the earliest recorded building in 1636 to 2017.  Buildings are shown cumulatively, with the year indicator showing the year that is being added to the map.  Each century’s buildings are color-coded as shown in the legend. Map created by David Krathwohl with data from MassGIS property assessment records.  It shows houses and buildings that still exist, but houses that were torn down and replaced are not included in the data. 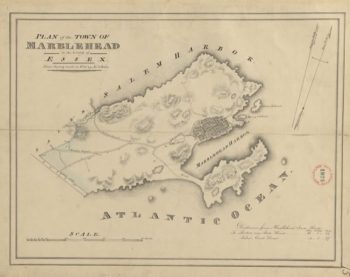 A follow on to the Plan of the Town of Marblehead by Alfred Ingalls in 1795, this map was required by the state, with specifications for the scale and features to be shown.

1850  Plan of Marblehead by Henry McIntyre

This is one of the first maps of Marblehead to use modern surveying techniques.  It is also the earliest detailed map of the town, often including the names of property owners and the locations of important commercial buildings.  This version of the map was cut and mounted on linen so it could be folded.  The digital copy of the map was created from scans of each square made by Standley Goodwin from two copies of the map by selecting the most legible sections from each copy.  The merged version of these scans was created by David Krathwohl.  Standley has also created a complete version of the map that includes content that was lost in the cuts.  A complete scan of another copy of the map is provided by the Levanthal map library, but unfortunately the resolution makes it difficult to read some of the smaller names. 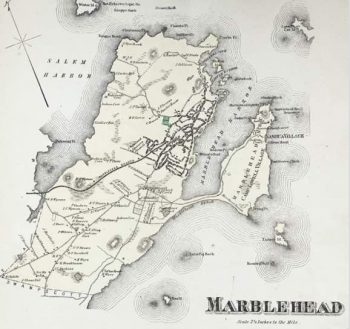 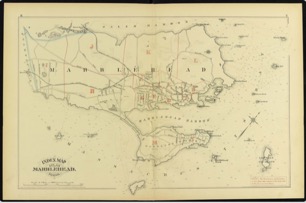 1881  Atlas of Marblehead, Mass. by Griffith Morgan Hopkins, Jr.
Follow this link to download a pdf of the 1881 atlas that was reproduced in print form for the Mapping Marblehead, the Nineteenth Century exhibit.
https://archives.lib.state.ma.us/handle/2452/206046 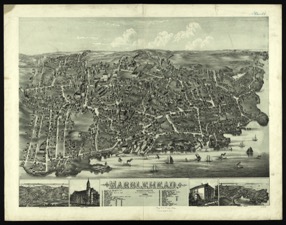 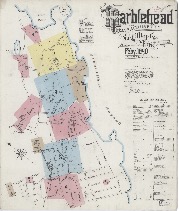 1890  Sanborn Fire Insurance Map from Marblehead, Essex County, Massachusetts, by the Sanborn Map Company
The Sanborn Map company created a series of maps for the fire insurance industry.  These maps preserve an incredible  level of detail that includes building materials, flammable materials, and information about watchmen.  The Library of Congress has digitized many of the Sanborn maps and makes them available through their website.
https://www.loc.gov/item/sanborn03777_002/