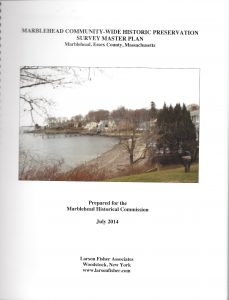 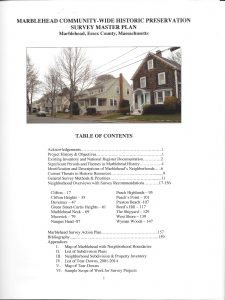 The Master Plan was created by Larson Fisher Associates, as consultants to the Marblehead Historical Commission.

To create the Master Plan, the Town was divided into 10 different “neighborhoods”, based on a combination of 19th and 20th century subdivision plans and the views of several Marblehead historians. The historical context and development history of each of these neighborhoods was established, followed by reconnaissance surveys of these  neighborhoods to establish the architectural history of each area. In addition, a map of demolitions from 2001-2014 was created to assess those neighborhoods under the most development stress. The outcome was a ranking of the order in which detail area and structure preservation surveys should be conducted for these neighborhoods and also for Town-owned buildings.

It is expected that completing surveys of the entire town will be a ten-plus year project, with each neighborhood taking one or more years to complete.

Outcomes for each project will be detail “Form A” and “Form B” survey sheets, National Register of Historic Places nomination recommendations, and other potential recommendations to help preserve the historic character of Marblehead’s neighborhoods.