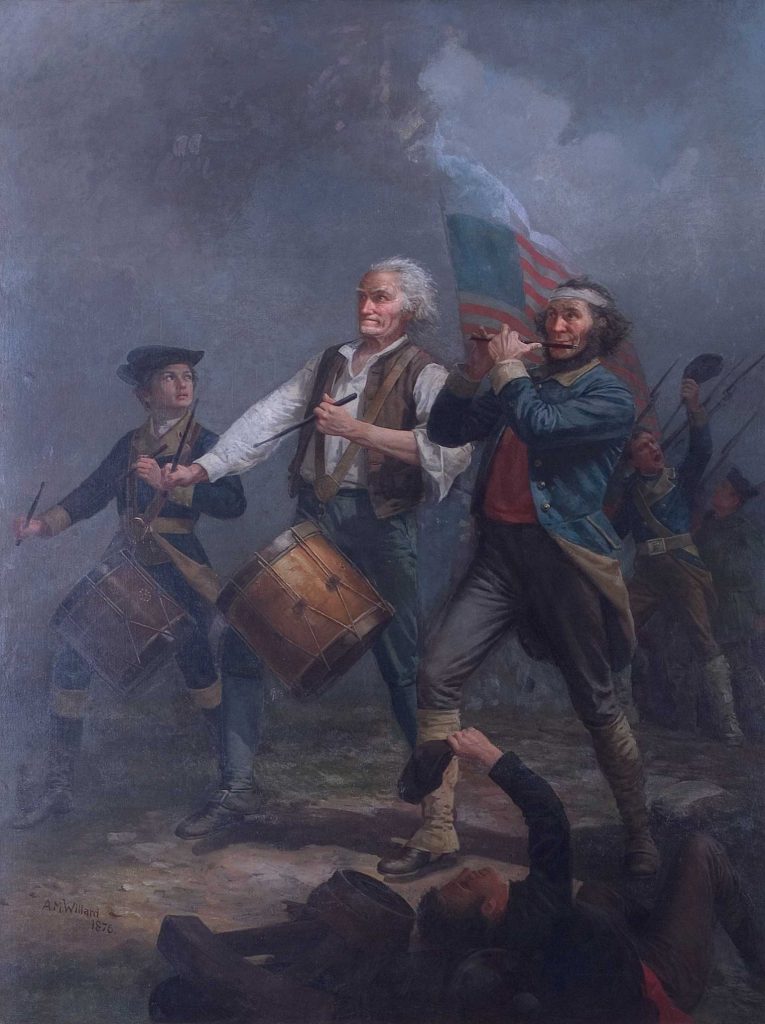 One of America’s most iconic paintings can be seen in the Selectmen’s Room at Abbot Hall. The Spirit of ’76, originally titled Yankee Doodle, was painted by Archibald M. Willard, of Cleveland Ohio for exhibit in Philadelphia during the 1876 centennial celebrations. Although Willard subsequently created a number of copies of the painting, this is the original.

For centuries, armies used music as the means to communicate the military orders of the day to soldiers. The high pitch of the fife and the sharp sound of the drum allowed messages to be heard at great distance, even through the din of battle. Boys under 16 (often following their fathers into war) and men over 50 (too old to enlist) were the musicians, usually led by a Fife and Drum Major with musical talent who would instruct them in the numerous rhythms and tunes the army depended on to maintain order in battle and in camp. During battle, drum beats indicated when to load and fire muskets, or announced which direction to turn when marching.  Fifes played tunes to indicate cease fire, or “Parley,” indicating their side’s wish for peace talks or surrender. Today’s Glover’s Marblehead Regiment re-enactors are often part of Town celebrations and include a fife and drummer at the front of the Regiment.

In 1880, General John H. Devereux (whose son was the model for the drummer boy), bought the painting and donated it to the Town of Marblehead to be “erected in Abbot Hall to the memory of the brave men of Marblehead who have died in battle on sea and land for their country.” Devereux was a Marblehead native who eventually made his fortune in Cleveland.