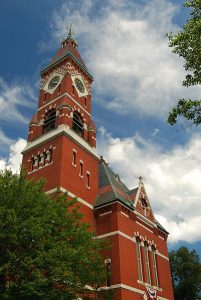 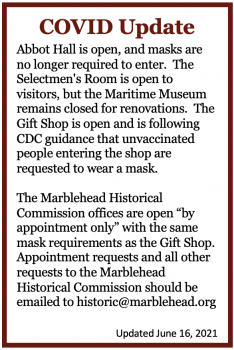 Abbot Hall is the seat of Marblehead Town Government and the center of Marblehead Historical Commission activity.  It houses the offices of the Historical Commission as well as several museums, artworks, documents, and artifacts. Abbot Hall, built in 1876/1877, has a rich history. It is located on Washington Square, formerly the Town Common. In 1872, Benjamin Abbot bequeathed funds to the Town to build Abbot Hall and the architectural firm of Lord and Fuller was commissioned to design the building. Abbot Hall was accepted as a listed property in the National Register of Historic Places in 1974.

Abbot Hall is located at 188 Washington Street in Marblehead, MA  01945. Free, on-street parking is usually available for visitors. It can also be reached by MBTA bus via routes 441/442 and 448/449 that run from the Wonderland and Downtown Crossing T stations, respectively. It is a few blocks walk from the Pleasant St @ Rockaway bus stop. See the MBTA web site for more information:

Abbot Hall is home to the Selectman’s Room where the well-known painting, Spirit of ’76 and the Town Deed are located. There are many historical displays in the first level hallways and stairways as well as in the auditorium on the second floor.  For more information, see Selectmen’s Room and Abbot Hall Displays. These areas are open to the public at all times that Abbot Hall is open (see above).