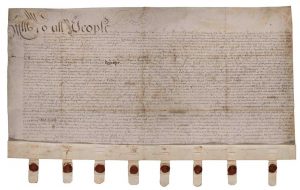 The Town Deed is the original 1684 deed of purchase for the town’s land from the Naumkeag tribe for 16 British pounds (approximately $80 in today’s dollars). Handwritten in iron gall ink on parchment, the Deed hangs in the Selectmen’s Room in Abbot Hall. It is said that the deed was discovered in a house in Natick, MA, and was donated to the town. In 2004, Marblehead’s fourth-grade students raised funds to properly frame the deed.

An archival quality copy of the Town Deed is on display at Abbot Public Library, on the second floor just outside the Marblehead Room.

Background and History of the Town Deed

On Oct. 19, 1652, the Massachusetts General Court ruled that the Native Americans had a right to the land for which they had demonstrated some form of ownership, stating: “what lands any of the Indians within this jurisdiction have by possession or improvement, by subduing of the same, they have a just right thereto, according to that in Genesis 1 and 28, chapter 9:1, and Psalms 115:16.” In New England, most tribes, in fact, practiced some form of land ownership in the allotment of territory for residence, planting or hunting in which a kind of title resided in the individual, family or some larger group. Although many areas did not have (or no longer had, following the great plagues of 1617 and 1633) visible signs of Indian ownership, Marblehead did, with several Naumkeag settlement, grave and fort sites clearly evident.

June 18, 1684, partly because of Massachusetts Bay Colony communities’ resistance to governance from England and to collect and pay customs taxes, Charles II, King of England, formally revoked the charter of the Massachusetts Bay Company and invalidated all land titles stemming from that company. This meant that the inhabitants of Marblehead no longer had legal documentation of ownership of the town, and were subject to Native Americans of the Naumkeag tribe claiming the land as theirs.

It is generally thought that Marblehead was initially settled by fishermen in about 1629. Prior to its incorporation as a separate town on May 2, 1649, it was part of Salem, inhabited by fishermen as well as individuals escaping Puritanical rule in Salem. Land ownership was based on a royal charter given by Charles I to the Massachusetts Bay Colony in 1629. By 1684, Naumkeag Indian heirs of Chief Nanepashemet’s wife, the Squaw Sachem, had made several claims of ownership to all or part of Marblehead. On July 14, 1684 a town meeting appointed the Selectmen and seven townsmen to investigate and determine if these claims were valid; in addition, John Devereux and Samuel Ward were authorized by the town meeting to purchase the land and procure a deed for it in the name of the town if the claims were found to be valid.

Determining that the surviving Naumkeags (decimated by King Philips War and plague) had a valid claim, the sole survivor of Chief Nanepashemet of the Naumkeags, Winepoykin (also called Sagamore George) was found and agreed to sell the land of the town for the sum of 16 pounds (about $80). As he died prior to being able to sign the deed, his widow Ahawayet and other relatives signed the deed on Sept. 16, 1684. Since they were unable to write, they made their mark on seals, attached to the bottom of the deed. The 2014 assessed value of Marblehead property was $5,326,282,656.

The original deed was recorded in Salem, and  it was subsequently copied into another book, with substantial spelling changes from the original. The copy is available in the Salem Registry in Book 7, Page 1 and subsequent pages (note: link may not work the first time; try a second time). There is also an informative narrative of the historical context of the Native American Deeds on the Salem Deed web site.