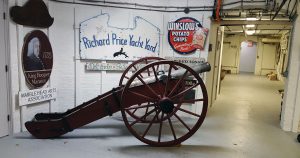 Marblehead has its very own cannon, which has just been moved into the basement of Abbot Hall. The cannon had been stored in the Town’s Gun House on Elm St. by Glover’s Regiment. Running out of room in the Gun House, the Regiment asked that the Town find another spot for the cannon – after some deliberation, it was decided to move the cannon into Abbot Hall’s basement rotunda, along with the Sign Museum.

The cannon has an interesting history. It was made in Seville, Spain in 1803. The cast bell-metal tube weighs 800 lbs. and originally had a smooth bore. At some point prior to the Spanish American war, the bore was rifled to allow use of shaped projectiles.

The cannon was captured by members of the USS Marblehead during the Spanish-American War in Cuba and brought back to Marblehead with its field carriage as spoils of war.

It was originally placed on display at the Lee Mansion by the Marblehead Historical Society for many years. It was then relocated to Waterside Cemetery and the Spanish American War site. Sometime in the 1970’s, vandals rolled the cannon into Salem Harbor. After some period of time under water, the cannon was recovered by the Marblehead Artillery. Selectmen then granted custody of the gun to the Artillery Company.

The Artillery Company refurbished the cannon and built a new field carriage so the gun could be fired at special occasions, including the bicentennial, 4th of July and the welcoming of the USS Constitution back to Marblehead in 1997.

After more than 30 years, the Artillery Company disbanded and requested the Town to transfer custody of the gun to Glover’s Marblehead Regiment, which has agreed to continue firing it at all special occasions.